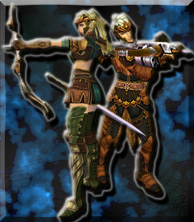 "Wanderers of the vast continents"

Scouts treasure the silence and the vastness of the wild, where their tracking and sniping skills turn them into dangerous hunters. Many a prey realizes this too late. Scouts are persevering wanderers, who are sensitive to dangers in their surroundings. This allows them to close in on their enemies from a favorable position. Their cold precision with bow and arrow is the bread-and-butter of their profession. Bloody close range engagements are not meant for them. If it comes down to it, they have enough trumps up their sleeves. For defense they rely heavily on their agility to evade hostile attacks. They always prefer the silent, elegant solution to a vociferous performance. Endurance, concentration and a sharp mind are the virtues of a real hunter, who keeps his eyes on the prey and kills it.

At level one, a Scout has these stats:

Scouts are masters in long range combat, and use their abilities to bring their bow and crossbow skills to perfection.

In close combat they depend on evasion and delaying tactics, to get into range for another shot or to wait for reinforcements who feel more at home in close range combat.

Specially boosted long range attacks can defeat opponents in a matter of seconds or at least weaken them in such a way, that they become easy prey in close combat. This is the area where scouts have to prevent their enemy’s attacks.

With their exceptional perception they can even find hidden foes from a safe distance, which makes them the natural adversaries of rogues.

Dexterity and intelligence are essential traits of scouts. Cleverly taking advantage of the physical distance is critical and every single decision has to be well thought out.

Retrieved from "https://rom.fandom.com/wiki/Scout?oldid=13419"
Community content is available under CC-BY-SA unless otherwise noted.